After 2 years of inactivity the Iatlian owners of the Microstars brand have released a small series of 11 Italian national figurines in time for the World Cup. Only available in Italy through petrol stations and news stands, this series will only be on sale for one month so will be hard to find very quickly.

The full list of figures in Azzurri Microstars can be seen here.

Italy Microstars Series 4 was released in early March 2011. Containing 21 figures, the series is now available for purchase here at Corinthian Seller. All figures are sold blind in Italy in a sealed foil bag and are therefore available only as mint loose Microstars and not in sealed sachets. Prices in Italy are roughly 350% higher than in the UK and unfortunately this means these Microstars are priced higher than usual here.

New Microstars in this release include, Alexandre Pato, Marco Borriello, Diego Milito, Wesley Sneijder, Roberto Cavani & David Villa. Along with some top stars from Series A and throughout Europe.

The full list of figures in Italy Microstars Series 4 can be seen here.

The nineteenth Series of Microstars celebrates the World Stars who appeared in World Cup 2010, this release has 40 players in the line-up with many brand new sculptures. The return of Barcelona players to this series is great news and there are many players represented - Messi, Xavi, Ineista, Toure, Henry, Alves & Marquez. Also, putting in their first Microstars appearances are Bendtner, Santa Cruz, Piennar and Aquilani.

Microstars Series 19 also sees the product released for the first time in the UK without confectionary. This means there are mint loose figures (which we place into a protective resealable bag) alongside the regular clear sachet figures.

The full listing can be see in our dedicated Microstars Series 19 - World Stars page : Click here to see them all.

Also, a new Microdome was released in May 2010. There are 16 new Microstars in the Microdomw with all seven base colours available for each player. Each Microdome will include 2 black bases. 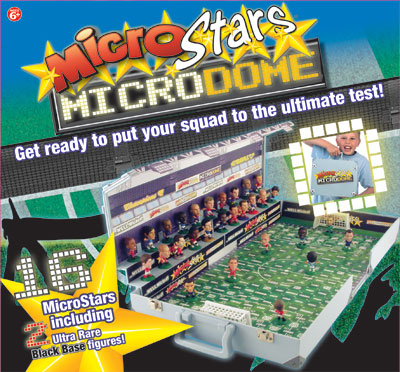 The full list of figures in Microstars Microdome 2010 can be seen here.